On Sunday, June 4th, the Caledon Hills Bruce Trail Club (CHBTC) held its 11th annual Volunteer Appreciation Picnic, and no surprise that it turned out to be another successful club event!

The forecast for the day during the week leading up to Sunday was ominous, with thunderstorms predicted to arrive right at lunchtime. However, we lucked out and didn’t even have a drop of rain. 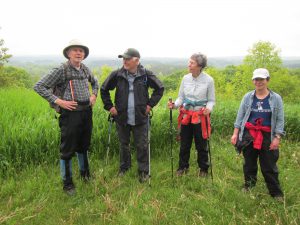 It wouldn’t be a CHBTC event without a hike, and this year Dave Moule volunteered to lead the hike that kicked off our picnic. I didn’t go on the hike this year, as I had volunteered to help set up for the picnic. With the sky still looking like it had the potential for rain, we were keen to have some overhead cover, and so with a few other volunteers, I learned how to assemble accordian-style tents (what a great invention!). Special thanks to Everdale in Hillsburgh, who loaned us four of those for the day. 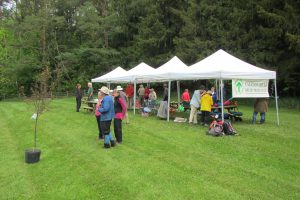 We had everything set up by the time the hikers were back, and more club volunteers arrived in time for the social hour before lunch. 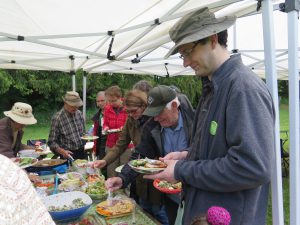 Just about when I thought I couldn’t wait any longer for lunch, we were given the go-ahead to help ourselves to the scrumptious potluck lunch. I was quite pleased with myself for finally remembering to bring a dish for a CHBTC potluck (third time’s the charm!), but then realized I had forgotten my plate and cutlery. No need to worry, though, as Volunteer Coordinator Colleen Darrell had a few emergency supplies in her kit for the day.

When the dessert crumbs were cleared, club President Bob Ferguson opened the recognition portion of the day. After welcoming us all, he indicated that this year’s event was being dedicated to Partners, to recognize the time and energy that the “quiet partners” of CHBTC leaders have given over the years.  Without such contributions, the club would not be as strong as it currently is.

Our first presentation was then made to representatives of our host for this year’s picnic, the St. Francis Centre, for their ongoing support.   We presented them with a crab apple tree that some of our volunteers later planted.

Bob then “passed the baton” to various presenters of this year’s volunteer awards.  Winners were: 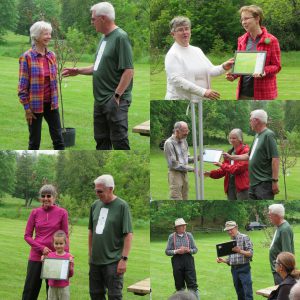 And last, but certainly not least, Bob then recognized several retiring trail captains for their lengthy service and commitment to the Trail:  Dennis Gallant, Fran Oussoren, Keith Oussoren, and Sallie Smyth.

Thank you to all our volunteers for your dedication and support! If you didn’t have a chance to join us at this year’s picnic, we hope you’re able to next year!