Isabel East impressed everyone as a tireless and enthusiastic volunteer with the Sydenham and Caledon Hills Bruce Trail Clubs and was the consummate recording secretary of the Bruce Trail Association minutes from 1965 to 1977. She describes the process of recording minutes as realizing she was “the only person who really heard everything that went on at those meetings”. In honor of her accomplishments, the Isabel East Award was created in 2012 by Caledon Hills BTC, to recognize a current member who demonstrates transparency, excellent communication and inclusiveness, the skills which Isabel exhibited during her 40- year tenure as an active BT member. By 2022, 15 members have received this honor with a certificate denoting their contribution to the trail. 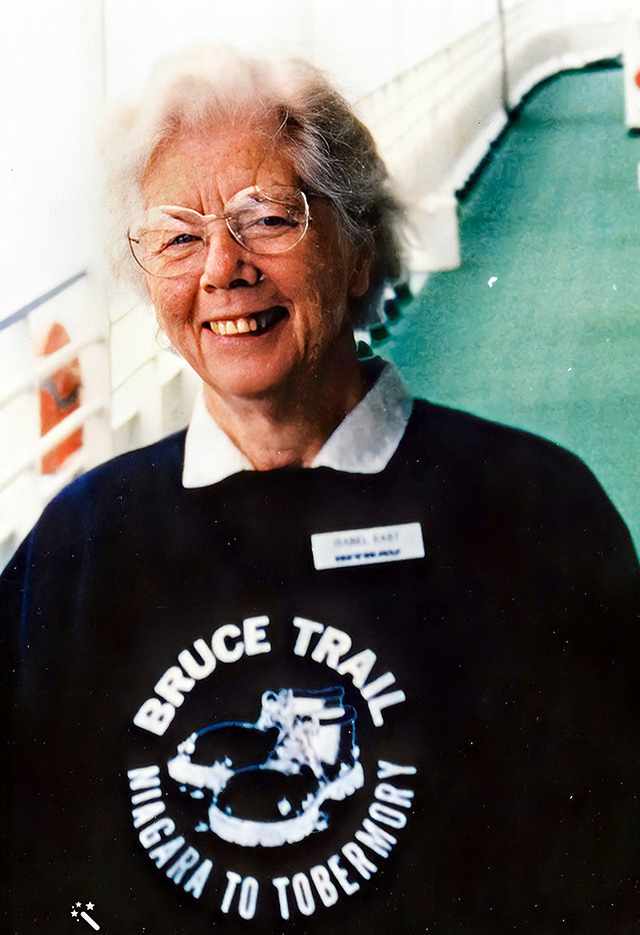 Isabel Leming, from the Sydenham Club in Owen Sound met Tom East on a hike in the mid- 60s. She needed some help navigating through the rocks. Tom obliged by giving her a push (from behind). From all accounts, this was the only push she needed to become involved in so many aspects of the clubs’ initiatives over the next many years. Tom’s daughter Vivian, was introduced to Isabel at a Bruce Trail AGM and immediately knew this was more than a friendship when she saw the sparkle in their eyes as they danced. Isabel and Tom volunteered and hiked side by side for 10 years before celebrating their marriage in the Belfountain Community Church in 1975. Surprisingly, no hiking boots were worn by either party or guests at the ceremony.

Isabel’s knowledge and versatility allowed her to move from landowner support, newsletter editor, social convenor, and secretary, to the President of the Caledon Hills Bruce Trail Club. After her death in 2005, the CHBTC board members felt it was fitting to designate a side trail in her memory alongside Tom East’s side trail in the Hockley Nature Reserve, so that their memory would remain united here as they were in life.