Tom East, an engineer and physicist, immigrated to Canada from England in 1951.

Hearing about the proposed Bruce Trail on a CBC radio broadcast in the early 1960’s, Tom connected with one of the Bruce Trail founders, Philip Gosling.

Tom decided to see firsthand the already-in-place Niagara section of the Bruce Trail. Leaving his vehicle at Queenston Heights, he returned after three days of hiking to discover that his car had been impounded, mistaken as abandoned! Undaunted, Tom became an early volunteer trail builder, helping to lay out the Bruce Trail in the Iroquoia and Caledon Hills sections.

Philip Gosling recalls a trail-building day in the Caledon Hills section – “…the day Tom East and I, using a compass bearing, were thrilled to find the opening in the escarpment (an unopened road allowance) leading down to the Credit Falls Road below. “(This rocky, steep opening became known as the Devil’s Pulpit!) 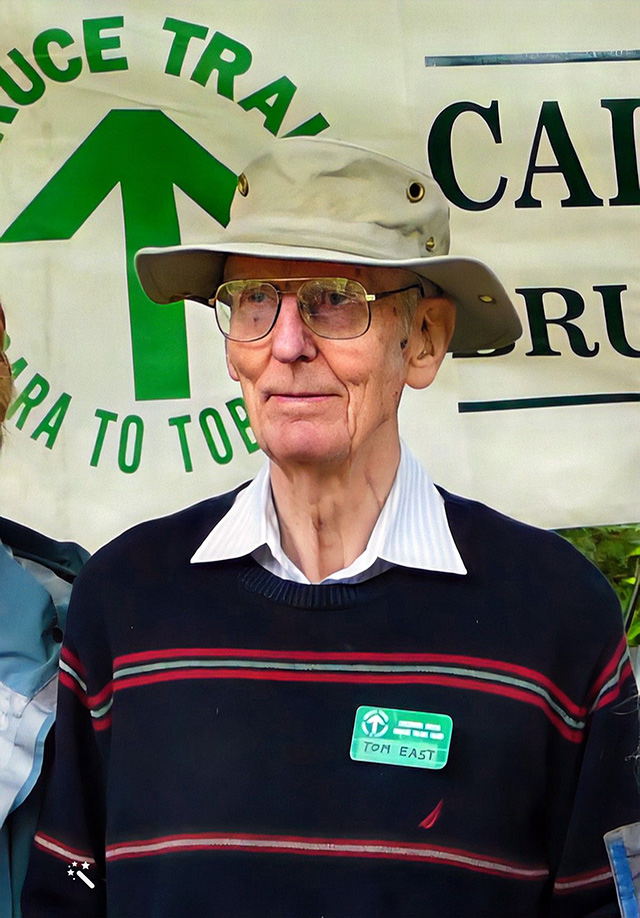 In 1965, the very first Bruce Trail Guidebook was produced under Tom’s direction – two years before the Bruce Trail was officially completed and opened in 1967.

Always far-sighted and a practical thinker, in his first report as Bruce Trail Conservancy (BTC) President in 1969, Tom stated that his aim was “to preserve the Trail”. That philosophy has remained consistent – the BTC mission statement, updated in 2017, is: Preserving a ribbon of wilderness, for everyone, forever.

Tom also developed the concept of the “Optimum Route” for the Bruce Trail. The definition of the Optimum Route became “along or close to the top of the Niagara Escarpment or on top of the steepest part of the slope”. This concept continues to guide trail placement and land securement by the Bruce Trail Conservancy.

Tom had a fierce loyalty to the Caledon Hills Bruce Trail Club – always volunteering in the Club’s annual Fall Colours End to End of the Caledon section and attending Club Annual General Meetings – until his death at age 90 in July 2012.

You can hike the 2.5 km Tom East Side Trail, crossing rolling woodlands in the Hockley Valley Provincial Nature Reserve. Together with the main Bruce Trail, it’s possible to make a 4.8 km loop, or, add on a hike on the Isabel East Side Trail (Isabel was Tom’s spouse and also a long-time volunteer) for an additional 4 km loop. (BTC Ref Guide, Map 18)

Tom was a pioneer of the Caledon Hills Bruce Trail Club and the Bruce Trail Conservancy. We are grateful for his legacy – establishing and helping to preserve the trail that we enjoy so much today.