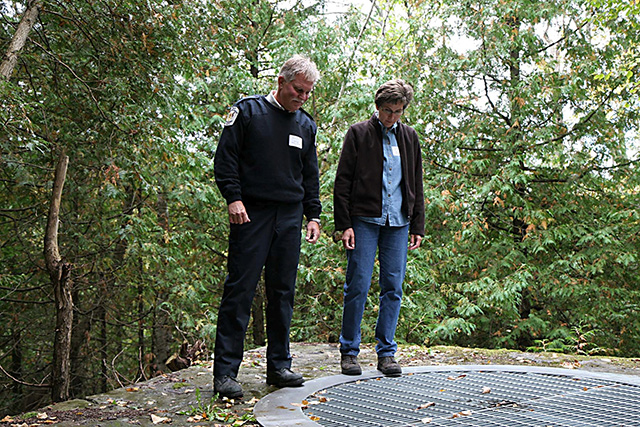 It may take a village to raise a child. But it required a handful of enthusiastic volunteers, six cooperative landowners, one train, a helicopter, a 363kg steel grate, and the determination of a Bruce Trail end-to-ender to build the Ring Kiln Side Trail.

Had you been there on a cold, sunny Friday in January 2007, you might have wondered just what was going on in Caledon’s historic Forks of the Credit. A helicopter hovering above the area’s iconic trestle bridge with the sheer escarpment cliffs in the background would certainly have raised an eyebrow. A disk dangling 30m below that chopper would definitely have
been hard to explain. Yet, that helicopter was just one of a multitude of pieces that had to fall into place before the 600m-long Ring Kiln Side Trail could be officially opened nine months later, on September 28, 2007.

The idea of building a trail into this historic relic of Caledon’s industrial past belonged to Barry Westhouse. A long-time and inexhaustible Bruce Trail volunteer best known for building stairs suited to his 198cm (6’6”) frame, Westhouse is also a keen amateur historian. It was his sleuthing that located the century-plus-old ruins of a Hoffman lime kiln (circa 1896).
Designed to operate for 24 hours a day, seven days a week processing the Niagara Escarpment’s limestone in 12 burning chambers, the kiln only operated for three years. A down draft in the chimney forced its premature closure, and its long slow decay began. By 2007, it looked more like an Inca ruin than a former industrial plant. Intrigued by this bit of history hidden so close to the main Bruce Trail, Westhouse proposed the idea of a side trail.

With the CHBTC fully behind her, Carol Sheppard took on the role of volunteer project manager with the determination of a Bruce Trail end-to-ender. Calling upon her keen negotiating skills, Sheppard obtained permission from six property owners for the trail to cross their land. Then she obtained consent from the Ministry of Natural Resources (MNR) since
the lime kiln sat on its property. In comparison to what was still to come, however, these tasks were relatively easy – much like the first section of an end-to-end attempt. 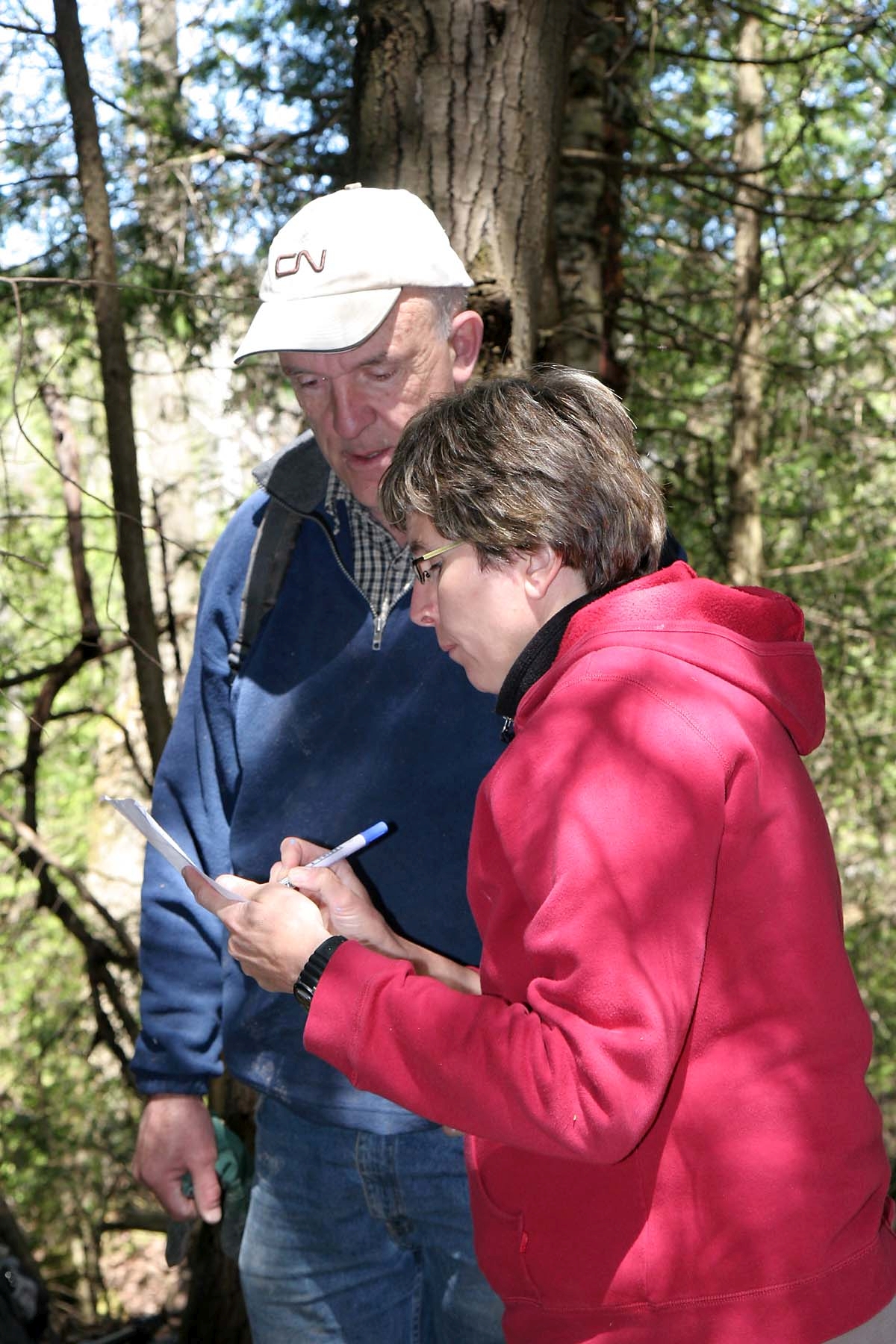 The MNR’s permission came with a condition: For safety reasons, it demanded that a cover be placed over a six-metre deep, 1.5m-wide hole that had been left behind after the lime kiln’s 30m-tall chimney crumbled. No one wanted daredevil youngsters, unsuspecting hikers or curious animals to tumble into the chasm. Determined, Sheppard put her ingenuity
and negotiating skills to the test. First, she found a company to design a cover for the hole. Then she found a firm willing to manufacture it. Next, she had this 363kg steel grate transported to Inglewood where the Orangeville-Brampton Railway had agreed to move it (at no cost) via train to the site of the lime kiln. Only then, believe it or not, did the greatest

challenge begin. How could they get the grate from the railway tracks up a long steep bank to its final resting spot? Initially, the plan was to clear a wide swath of forest and somehow carry the grate in that way. However, not only would this require a Herculean effort, but it was also unpopular with the environmentally minded trail group.

The challenge prompted Chris Walker, the Bruce Trail’s volunteer trail maintenance director, to suggest an alternate plan. With a sheepish grin, Walker said, “Boy, it sure would be nice to have a helicopter to save us all this work.” It would cost more money but be less destructive and a whole lot easier. 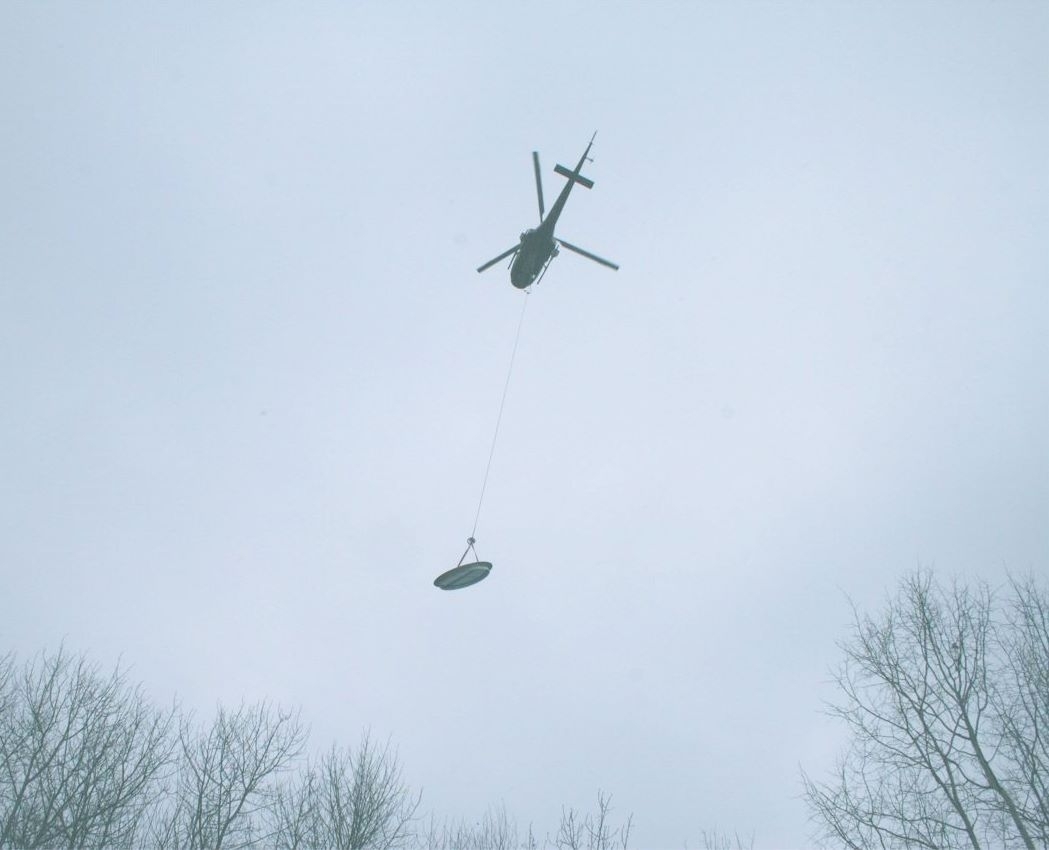 Once again Sheppard was up to the task. Not only did she find a chopper pilot willing to do the work, but he also agreed to do if for free! When the time came, the helicopter successfully placed the perfectly sized grate right on target.

All of which explains why, when the Ring Kiln Side Trail officially opened nine months later, it was a proud moment – but also a poignant one. Chris Walker had sadly died only days before the ceremony. In remembering Walker, the CHBTC’s president, Janice McClelland, had one more surprise for the more than a dozen people who hiked into the lime kiln on that officious afternoon. After unveiling the lime kiln’s interpretive sign, McClelland pointed out that “CHBTC 07” had been inscribed in the plaque’s cement base. It was with mixed sadness and joy that McClelland explained that two months before, with his typical enthusiasm, Walker had spontaneously carved this inscription into the still-wet cement, forevermarking his role in another successful CHBTC team-effort.