By Guest Blogger Stew Hilts, with an Introduction by Ross McLean

Stew Hiltz’ career at the University of Guelph combined the physical sciences of conservation with the social sciences of rural planning. Upon his retirement, he moved north and became active with the Beaver Valley Bruce Trail Club. He is currently the head of their Land Stewardship Program and he writes regularly for their newsletter.

His recent article on “Sauntering” from the winter 2018 Beaver Tales, the club newsletter, is reprinted here with Stew’s approval.

When I was young and foolish, I used to hike long-distance end-to-ends. Then with age and more maturity came a realization that what I craved could only be achieved by sauntering. Stew’s very personal essay captures so well these rewards, and is an invitation to all of us to slow down and to enjoy the beauty of the natural scene.

I’m here to put in a good word for the benefits of ‘sauntering’ the Bruce Trail. I know many of you are ‘hikers’, but walking slowly, stopping often, and observing even the ordinary things you’re passing on the trail can be a memorable experience too. Even a short walk quickly gets filled with things of interest.

The great Scottish-American conservationist, John Muir, is often mistakenly given credit as the source of this idea. In an oft-quoted reference, Albert Palmer, a member of the Sierra Club who hiked with Muir, reported a conversation in which Muir declared: “People ought to saunter in the mountains – not hike!” Muir had gone on to say that “we ought to saunter through the mountains reverently”, as if we were on a “pilgrimage to the Holy Land. Indeed, the mountains are our Holy Land”.

In fact, the credit for the use of the word “saunter” in this context should go not to Muir, but to Henry David Thoreau, whose writings Muir had undoubtedly read. 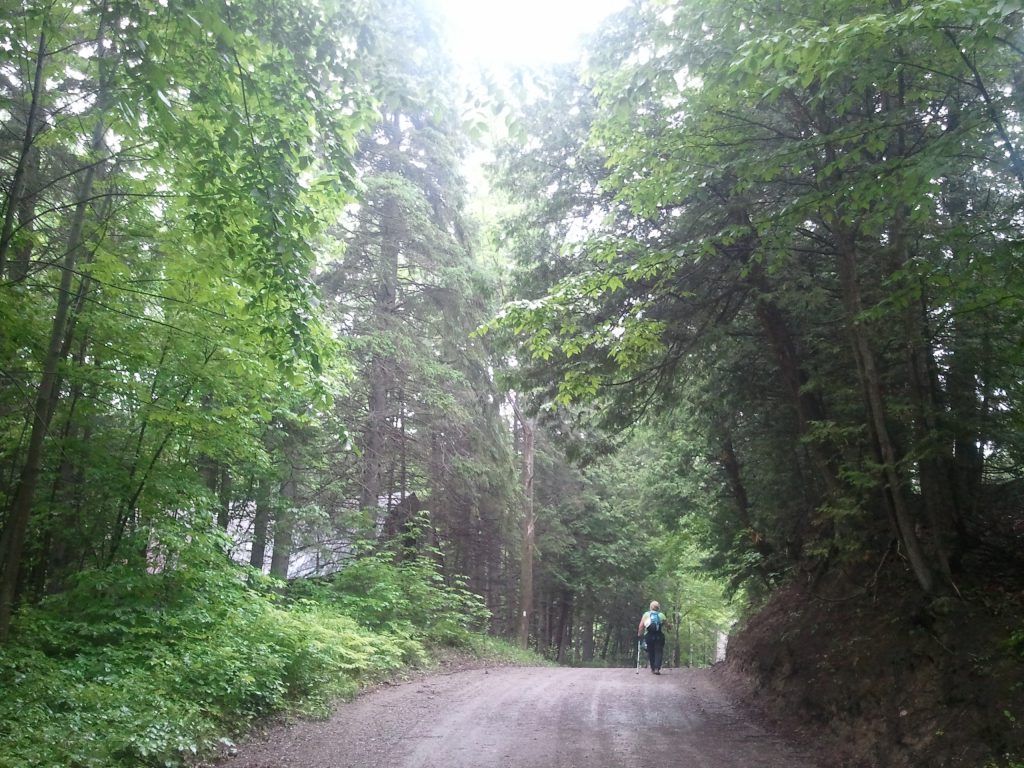 Over a decade before Muir began his locally celebrated time in Trout Hollow, on the outskirts of Meaford (Ontario), Thoreau first delivered his famous lecture Walking, later published as an essay.

Thoreau claimed to “speak a word for nature”, and went on to write:

I have met with but one or two persons in the course of my life who understood the art of Walking, that is, of taking walks—who had a genius, so to speak, for sauntering, which word is beautifully derived from idle people who roved about the country, in the Middle Ages, and asked charity, under pretense of going “a la SainteTerre,” to the Holy Land, till the children exclaimed, “There goes a Sainte-Terrer, a Saunterer, a Holy-Lander.” 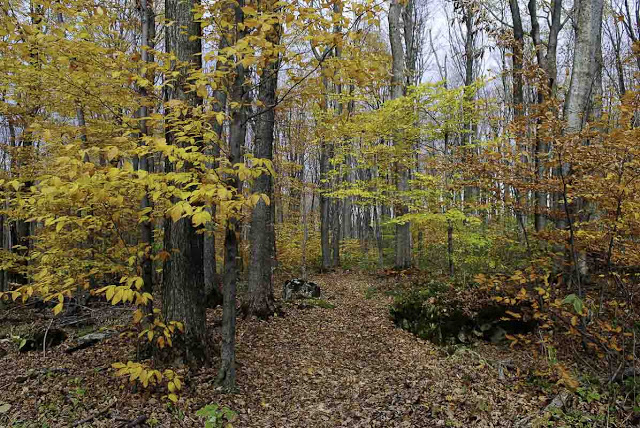 For Thoreau, and for Muir, a walk in the woods or the mountains was a spiritual experience. All through their writings you find descriptions that emphasize this. And they spent a lot of their effort in getting others to recognize the beauty of nature.

I think it was my mother who instilled this in me. Endlessly curious and interested, she started taking us for walks in the woods as early as I can remember. A walk with a young child is by nature a slow process, as children are distracted by everything they see. And I think I’ve been distracted ever since. 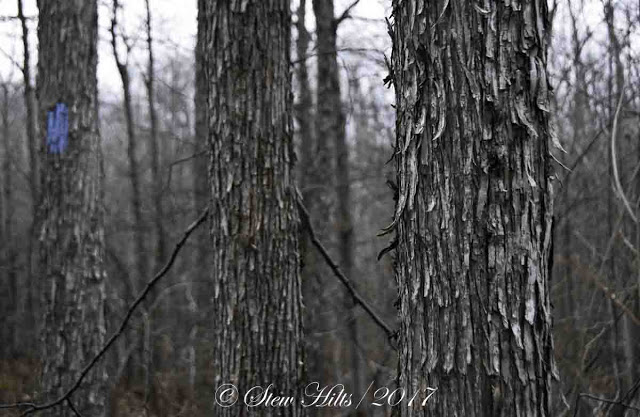 When I saunter the Bruce Trail I’m first drawn to the trees which compose the forest I’m walking through. From planted White Pine to majestic Sugar Maples, we’re surrounded by living, growing things. Those leaves in the canopy aren’t just fluttering bits of green, they’re tiny little factories generating sugars which are the fuel for life, and oxygen that we depend on to breathe. On every walk you are surrounded by a living, pulsing group of other organisms – in other words, an ecosystem.

Of course, there are many more things to notice along the trail than trees. From rocks to butterflies, from frogs to ferns, there are many more reasons to stop and look than I have time for. I take note of the exposed layers of the rocks, trying to understand where they fit in the Niagara Escarpment sequence. I snap pictures of plants, insects, amphibians, hoping to identify them later on if I can’t already do so. I make mental notes of what I’m seeing just so that I can remember the experience, and perhaps write about it (I write a blog called ‘Seasonsinthevalley’). 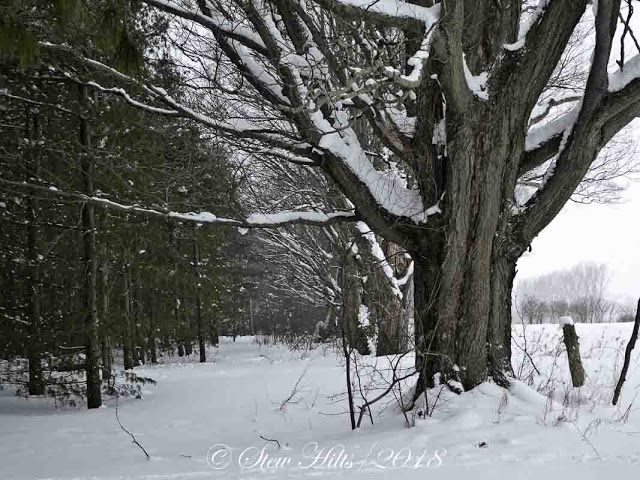 The change of seasons adds an entire new dimension to ‘sauntering’ down the trail. From the bright greens of spring through the birds of early summer, to the fall colours and then the white blanket that lets me get out the snowshoes, the constant change makes it worthwhile to saunter again and again. Even the changing weather brings new experiences. In the winter you get a sense that the forest is sleeping, which in a very real sense it is. Photosynthesis has stopped, leaves have fallen, many animals are hibernating. The pace of life slows, and you have to listen more carefully. But there is still plenty of beauty to be found along the trail.

Both Thoreau and Muir claimed, over 150 years ago, that being in nature is a spiritual experience. The walking, the fresh air, and the other life around you all contribute to feeling better, emotionally, intellectually and spiritually. 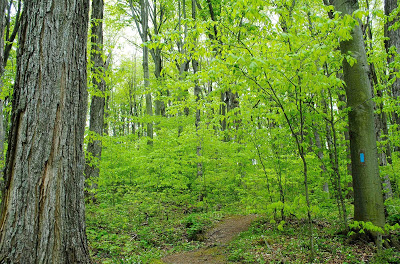 Their message is reflected in today’s idea of ‘forest therapy’ or ‘forest bathing’. And it’s reflected in the concern for nature deficit syndrome among today’s children. Referred to in Japanese as ‘Shinrin-Yoku’, it is the medicine of simply being in the forest. It reflects a belief that “a slow, deliberate, meditative walk in the woods can offer a host of mental, emotional and physical benefits”. Sounds like ‘sauntering down the trail to me, and I urge you to try it.

Don’t forget!  Sunday, April 8th is our Annual General Meeting.  Join us for some or all of the activities we have planned!

2 thoughts on “Sauntering on the Bruce Trail”