The forecast was grim, with snow and cold, but inside all was cozy and cheery.  A brave group of intrepid hikers spent the morning in the woods, led by the ever faithful Albert McMaster. 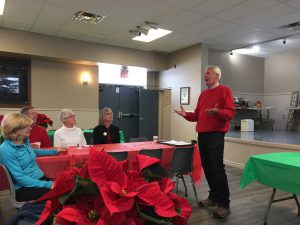 The hall in Caledon Village was decorated in festive red and green, as if we were waiting for Santa.  An overabundance of eclectic items appeared as if by magic for the silent auction.  Finding the perfect item at a remarkably low price, while saving it from the landfill and contributing to the Bruce Trail all in one.  It really is magic. 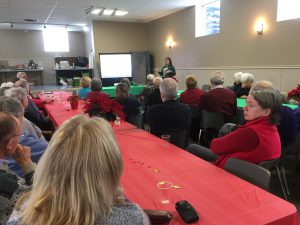 Christine Elliott who has been administering our club’s Instagram account gave a short talk on Facebook and Instagram as the way of the future and how to use it to attract new members in the younger demographic.

And then the best magic of all was the meal itself which somehow always satisfies with a wide variety of interesting dishes.  Cleanup was pretty quick with a lot of willing hands.  Everyone was trying to get home before the snow became too much.

Thank you Jackie and Cec Clark who put in a great deal of effort, and thanks to all who came out and made the event a fun sociable day.