Most hikers walk the Bruce Trail without ever considering the process by which a route was created.  The more I learn about this process, though, the more amazed I am!

The first part of the process is having land on which to put a trail.  The Bruce Trail Conservancy has an aggressive land acquisition program in order to secure the trail on the optimum route.  However, many of these acquisitions require handshake agreements with neighbouring landowners to connect new sections of the trail.  This non-contractual arrangement is the way the Bruce Trail was built by Philip Gosling and his team back in the 1960s, and with only 63% of the optimum trail route secured, permission from private landowners is still a key part of the Bruce Trail system.

These handshake agreements make it possible to move the trail off the road, move to the optimum trail route, and gain access to the beauty of the Escarpment.  A trail reroute can often require obtaining permission from multiple landowners for the trail to cross their properties.

One of the most significant executive roles with any Bruce Trail club is that of Landowner Relations Director.  This role has two key responsibilities:  to keep the current landowners happy with having the trail on their land, and to search out new landowners for permission to locate the trail on their property. 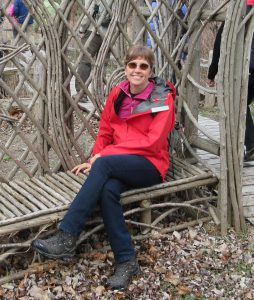 Carol Sheppard has been the Caledon Hills Bruce Trail Club’s Landowner Relations Director for more than a decade.  In this brief period of time, the number of handshake agreements in Caledon Hills has doubled, and she has played a key role in many of the section’s trail reroutes.  One of the ways Carol has maintained good relations with the many generous landowners who have given us permission to walk on their lands is by conducting hikes to thank them.

Carol has been described as enthusiastic and dedicated.  She has also been noted for “creativity in solving tough problems, steadfastness in seeing the project through, and excellent people skills in obtaining the support of the community.”

One of the club’s major trail reroutes that Carol’s work with landowners helped to achieve was in South Hockley, and required seven new or revised handshake agreements.  Her agreements with six landowners south of the Forks of the Credit Provincial Park also made the Ring Kiln Side Trail possible.

As you can see, having someone as dedicated as Carol in a key role like Landowner Relations Director will help to achieve the dream of the optimum trail route!